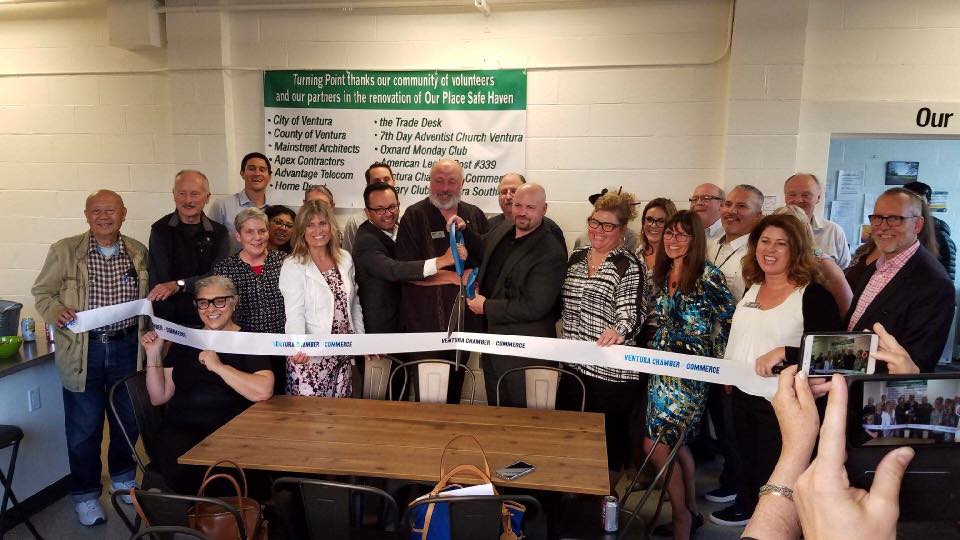 I went to Turning Point’s Our Place Safe Haven’s ribbon cutting on Oct 25, 2018 where many inspirational leaders spoke about the newly renovated building. It’s beautiful, and a place many people will be proud to call home while they get back on their feet. Bob Davis, a Turning Point board director and Mortgage Loan Officer of Provident Bank,  spoke of helping those who are “not poster child cute” which really got me thinking.

Once outside, I was walking to my car, giant scissors and roll of ribbon in hand when approached by a man who looked homeless and asked if I would help him. My mind said I had places to be, but my heart said,

“You’re not going to say no after attending Our Place Safe Haven’s ribbon cutting? So I say yes!”

He told me that he just left the hospital, and was put up in a motel, but left to get a beer, walked a couple blocks and got lost. He still had his hospital band on, and bandages. I was naming the local motels and racking my brain as to where to start when Kevin Clerici, a Turning Point supporter, was leaving the ribbon cutting and happened to be crossing our path. He stopped to help.

30 minutes of phone calls, questions, researching… and we found where he was staying. At first, he was denied entry. More phone calls… and finally, success. He would have been on the streets that night if it wasn’t for us saying “yes” and not taking “no” for an answer.

I walked back to my car, ribbon and giant scissors still in hand. This was a first for me, but this was just another day for Kevin. We are lucky to have him Downtown, and the city would be lucky to have him serve on city council. I’m so grateful for all the inspiration at the ribbon cutting, and I’m so happy to have made a difference today.

Give to Turning Point

Keep up with what’s going on with Turning Point!

We’ll send you occasional emails that include upcoming fundraiser events, stories of how Turning Point is transitioning our homeless community and giving them healing, hope, and haven and opportunities for you to volunteer. Click here to subscribe.